At the end of last year, Laura Gardiner contacted the school. Laura was Wellington’s Head Girl in 2004 and attended the school at the same time as one of our more well-known former pupils…

Laura takes up the story of her reunion with friend and fellow violinist, Nicola Benedetti:

“In October 2017, Nicola Benedetti visited the Oasby Music Group, a group I established in Grantham. Nicola and I are both former pupils of Wellington School and we both started our journey to become violinists under the tutelage of Brenda Smith. At the time, we were also members of the Ayrshire Suzuki Group.

Nicky left Wellington in the mid-1990s to study at the Yehudi Menuhin School (a renowned school for musically gifted children) but I stayed on, leaving in 2004 after having served as Head Girl of Wellington School in my final year.  Despite this early separation in our lives, the old school ties still held strong and Nicola and I reminisced about performing together in the Ayrshire Music Festival, as the Avanti Chamber Group. Recently, a picture of the group has resurfaced (see above).

Nicky’s visit to the Oasby Music Group was incredibly special as it wasn’t just two former Wellington pupils collaborating but instead two accomplished women reuniting to perform after 20 years. In fact, the last time we played together was in Carleton Turrets Hall!

Brenda, my violin teacher at Wellington, was was my inspiration in setting up the Oasby Music Group so you could say that thanks to Wellington, I am where I am now! I owe a great deal to both Brenda and the school.

I hope this story will inspire Wellington’s musicians to keep working hard and to recognise the power of music in bringing people together. Finally, I hope they enjoy playing in ensembles as much as we did!’

Oasby Music Group’s videos can be downloaded and shared from here and former pupils can sign-up to our soon-to-be relaunched Former Pupils Association here.

Enjoy this story? Find out more about Laura in next term’s edition of The Turret. 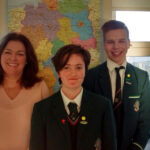 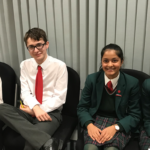