This year’s district hockey tournament showcased a weekend of superb hockey. In attendance were some of Wellington’s own, Olivia and Eilidh played for the U18 whilst Heather, Leigh  and Amy  played for U16. This year Amy was also given the opportunity to captain her team. This is a fantastic opportunity and she should be proud of her selection.

The U16 South West team had an excellent first day, setting the bar high as they stepped into day two. The girls placed fourth after narrowly losing their play-off match by one goal. They played exceptionally well and should be proud of their performance.

The U18 South West team faced some strong competition across the weekend and were able to rise to the challenge, winning many of their matches. It was down to the very last game to decide the winners, West versus East. The girls had a nervous wait to find out their final placing. They watched the last match in hope for a draw. This would have given them top podium position. Unfortunately, it was not to be this year. However, the girls should be extremely proud of 2nd place, bringing home some silverware.

Well done to all the girls who competed to make it such a fantastic weekend. 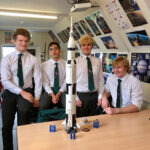 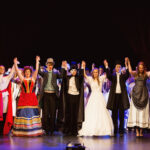 Wellington’s take on Phantom of the OperaNews