On 8th March over a hundred young people from Wellington School and Mallinckrodt-Gymnasium joined together in Ayr Town Hall to celebrate the 30th Anniversary of our partnership through the universal language of music.

The combined orchestras filled the stage and together they played pieces with links to both countries, Handel’s Music for the Royal Fireworks, Highland Cathedral and the Scottish Premiere of a specially commissioned piece ‘A Magical Story’ written by our very own Mr Haggerty to celebrate our big anniversary.

During the concert, our Headmasters were presented with a Time Capsule to be opened at the 50th Anniversary celebrations in 2040 when the current participants will be in their 30s.

We were delighted to welcome John Rolfe MBE from the British Council to join us. Both the British Council and UK German Connection have provided practical and financial support for partnership activities over the past 30 years. John presented the school with the International School Award during the concert. 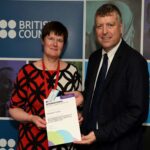 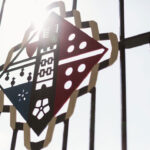 ‘Our Heroes’ – a Scottish Baccalaureate in Languages project by S6 pupil, Myah.News